On April 20, 2019, New Haven raised and New York City-based singer/songwriter Chris Peters released his EP, Chris Peters, Grown-Up Singer. As the clever title suggests, the EP explores Peters’ experience making sense of his early twenties and trying to understand what it even means to be a grown-up. 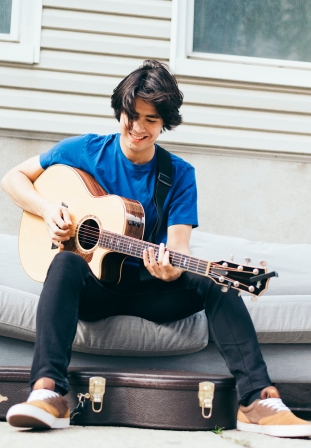 “The early twenties are a weird age,” Peters explains. “Right when you get the freedom to start reaching in earnest for your dreams, you feel less in control of your life than ever before, and, at least for me, less sure than ever of which dream you’re reaching for in the first place. It’s a moment of working out where you came from and where you’re going, of fighting to stay true to yourself when you still don’t know who that is. This record is about all that.”

Today, Peters premieres the music video for “Thunder Moutain,” a particularly sentimental last track off his EP. Peters explains, “‘Thunder Mountain’ is the last song on Grown-Up Singer for a few reasons, but the most important is that it’s where I am right now.” A trip with Peters took with his girlfriend “to a certain California theme park where she hadn’t been in years” served as the inspiration for the song.

“We were in our own world,” Peters noted, “and I imagine we attracted some funny looks. We were more into it than a lot of the kids were. I was so giddy and inspired that I thought I would write a song on the plane home. I didn’t figure out for another month that the song wasn’t going to be about the magical fantasy land but about the real world and what happens when you try to put the two together. How much should relationships be about escaping the grindy real world, and how much should they be about making the grindy real world easier to take? Or are those the same thing? I genuinely don’t know.”

The video, directed by Travis Gonzalez, produced by Cody Zumbro, and shot by Director of Photography Mitch Matacia, captures this exact tension between the fantastical and the real.

Throughout the video, Peters and his team take viewers on their own roller coaster ride of emotions. While there are moments of immense joy and extreme cuteness, such as the cardboard and projector theme park and baking scenes, at the start of the third verse the video takes a turn, with shots that emanate tension and distance.  The juxtaposed shots of the car turning the corner and the polaroid picture at the end of the video leave the viewer with that feeling of uncertainty so characteristic of the early twenties, but also with a certain appreciation and joy, or maybe nostalgia, for those formative years: a perfect ending for the album and start to Peters’ music career.

While Peters’ production team brought “Thunder Mountain” to life, I would be remiss not to praise Peters’ songwriting for one of its most notable features: astute attention to detail. Modest as always, Peters claims he does not “think visually at all,” yet each song on his EP tells a story chock full of images for the listener to conjure. With its churros and roller coasters, “Thunder Mountain” is no exception. Peters’ lyricism seems both clever and effortless, and I cannot help but smile at Peters’ clever wordplay of “please keep your feet and elbows on the ride” at the end of the chorus.

If you like what you see/hear, be sure to check out the rest of the EP, linked here.